A question that we get asked often and read about in numerous ski forums is “Which is better, Bansko or Borovets”. To answer that question now: there is no universal truth. Saying one is better than the other would be like saying apples are better than oranges. The thing is that they are simply two different types of resorts, each with it’s own advantages. In this post we will dig deeper into the subject, so that you can choose which resort is best for you. 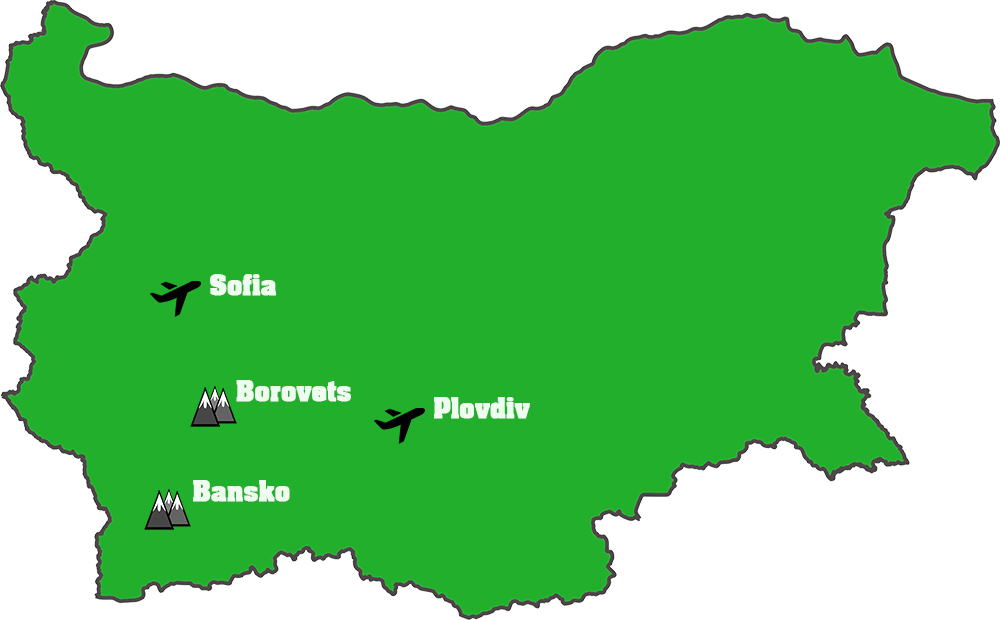 For international tourists, accessibility is very important. A resort that is hard to get to can bring up the total cost of your ski trip. Thankfully, both Bansko and Borovets are easy and cheap to get to from the airport. You have the option of shared and private shuttles from the airport to your hotel in the resort, taxis and even public transportation.

Borovets – This small resort is located in the Rila mountain range, close to the city of Samokov. It was established back in 1896 as a holiday retreat for Bulgarian royalty. It’s located 76km from Sofia airport and around 144km from Plovdiv Airport. The drive from Sofia Airport is around 1:20hours. Prices for a shared shuttle start from 9 euros per direction. (check transfer rates to Borovets and book online HERE)

Bansko – Bulgaria’s most famous resort is located in the Pirin mountain range. It’s 160km away from both Sofia airport and Plovdiv airport. The transfer time from Sofia Airport is 2,15 hours. Prices for a shared shuttle start from 14 euros, but regardless of the form of transportation, prices will be higher than those to Borovets. Even though Bansko is twice as far away from Sofia than Borovets, the transfer time is only 20-30 minutes more, as most of the drive is on the highway E-79. (check transfer rates to Bansko and book online HERE)

Borovets – There are 3 lifts in Borovets, which take skiers up to the various ski zones. The ski area in Borovets is divided into 3 zones:

Sitnyakovo ski center (1300-1750 m. asl.) – This is the lowest ski center and the lifts are part of the resort area. This fact turns many of the hotels into ski-in/ski-out accommodation. This is also where night skiing takes place, which is from 6:00PM till 9:00PM. This is also where most beginners learn to ski, as the slopes are well suited for first timers. Snow cannons help keep a good base snow cover.

Yastrebets ski center (1440-2050m. asl.) – This is the middle ski center and is serviced by the Yastrebets Express ski lift. This is one of the most popular ski areas as it provides a good selection of intermediate slopes and is equipped with snow cannons. To get there you need to take the gondola to either the middle or top station and ski down to the lift.

Markudzhik ski center (2140-2483m. asl.) – This is the highest ski zone in the resort. It’s serviced by a new 4 seat lift and two drag lifts. To get there you need to take the gondola to the top station and then traverse diagonally to the ski area. This zone has the most natural snow fall, but no snow cannons. It is also the most affected by the wind conditions, so sometimes it may be closed while the other parts of the mountain are open.

There are a total of 58km of ski runs in Borovets. 9 beginner runs, 9 intermediate runs and 4 expert runs. The lift infrastructure is relatively new, except for the main gondola (which is still in perfect working order). The biggest advantage of of the ski area being divided into 3 pieces is that each is affected differently by the weather (as they are at different altitudes. If the top ski center is closed, the other two will probably be working. If it’s raining at the bottom, at the top it will probably be snow and so on. 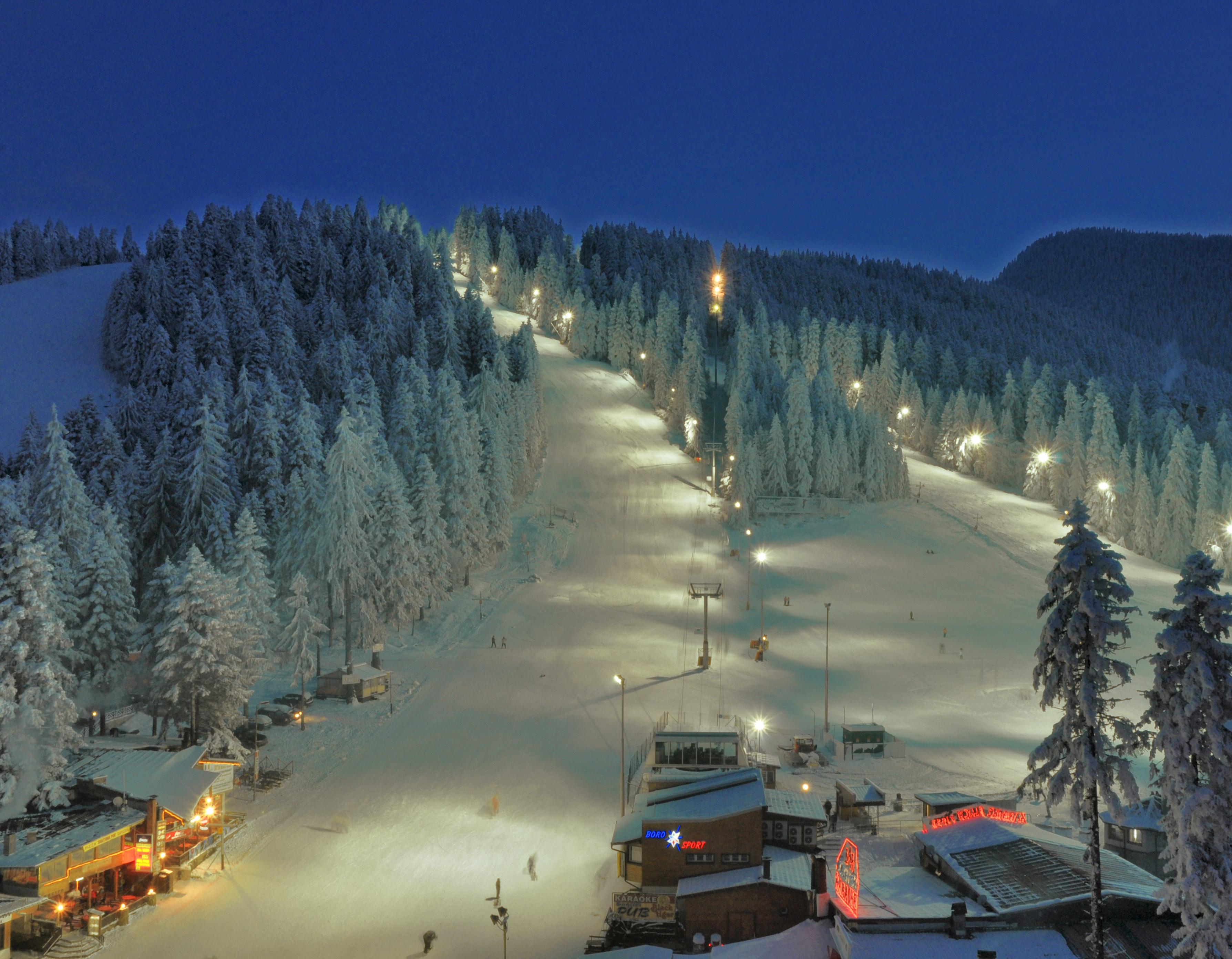 The best and only night skiing in Bulgaria is in Borovets

Bansko – The ski slopes in Bansko are concentrated into one ski area, with a smaller one lower in the mountain. The main ski zone starts at the top gondola station (1635m. asl.) and the highest point is at 2560m. asl. This allows for skiers to easily ski most slopes on the mountain, without having to transfer between ski areas. The disadvantage is that a big part of the mountain will  be closed if the weather conditions are bad. Unfortunately, Bansko only briefly offered night skiing and no longer does so, for now. There is just one lift (the gondola), which takes skiers from Bansko up to the rest ski zones and lifts, which causes an issue with long queues during peak season. (read more about the Bansko gondola queues HERE)

The second ski zone in Bansko is the Chalin Valog ski area (1100-1450m asl.) It’s located below the gondola mid-station and serves mostly for beginner skiers in its lower part and as a backup ski area if the main one is too crowded. Both ski runs are for intermediate and advanced skiers and can be very icy at times.

Bansko has around 90% of its slopes equipped with snow cannons, with only the Plato runs not having any.

Both resorts are a great place for people to come and learn to ski and ski school rates are much lower in Bulgaria than in most of the Alps.

Borovets – Even though there are less ski schools in the resort, than in Bansko, the quality is just as good. An advantage for Borovets is that you can also get lessons during the night skiing. This means that you can take a day off to rest and still get a few hours skiing time in the evening. (book online ski/snowboard lessons in Borovets HERE)

Bansko – The biggest drawback for Bansko is that the demand for ski schools can exceed whats on offer during the high season. This means that shared groups can be as big as 15-20 people per instructor and private instructors next to impossible to find. If you’re visiting Bansko in February, we suggest booking a private instructor well in advance. Outside of the high season, visitors have a big selection of ski schools to choose from.

When picking out from one of these two resorts, it’s important to know that their infrastructure is quite different and this affects the available options and prices.

Borovets – Borovets was built around the idea of being a resort from it’s inception. Most of the hotels are located around the main part of the resort complex, but some can be a few kilometers away from the gondola, in the woods. This means that there are much fewer hotels in Borovets, than in Bansko, so prices are generally higher for similar accommodations. 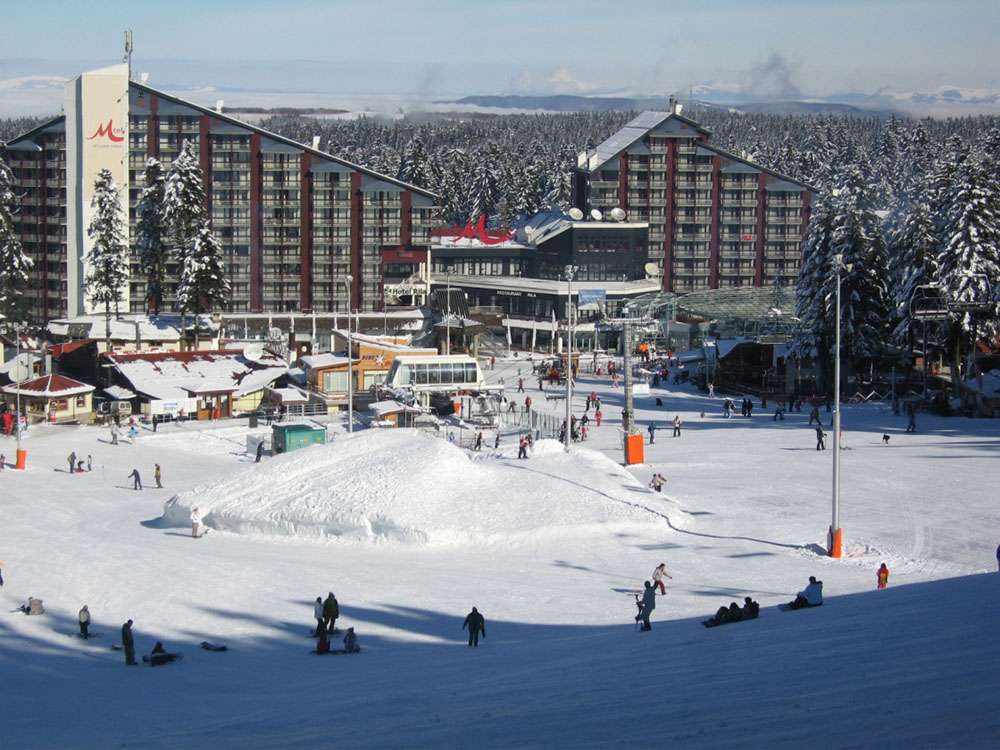 Bansko – On the contrary to Borovets, Bansko was first a town, which has been around for hundreds of years. The resort was built on the mountain next to the town with the first lifts being built in the 80s. The sheer number of hotels, guest houses, hostels and apartments in Bansko is much bigger and it’s this competition that keeps prices lower there. Many locals have also opened small family hotels, which are much cheaper than big hotels. With all of these hotels, the “bed base to ski zone size” is in favor of Borovets.

Borovets – As Borovets is smaller in size, so is the night scene. There are fewer restaurants than in Bansko and even fewer bars. But everything is closer together, so you won’t find yourself walking 30 minutes to get to that other bar you wanted to check out. The variety of restaurants is also smaller, but the town of Samokov is only 10km away, where you can find an even bigger assortment of places to eat and drink for even cheaper. Due to it’s smaller size and good concentration of bars, Borovets is the world leader in bars per square kilometer.

Bansko – Sometimes called the “frozen Sunny Beach” at night. Bansko has a huge variety of restaurants and bars of all types. And with thousands of visitors at any given time during the winter, the bars are far from empty and boring. It can also get quite hectic during the high season, with lines for the best restaurants and crowded bars.

Borovets – If you’re not planning on skiing everyday of your visit in Borovets, you have several options other than sitting in your hotel room. On hand in the resort you can go horseback riding, snowmobiling (book online HERE) or visit one of the spa centers for a massage. Close to Borovets is Sapareva Bania, which boasts one of the best spa facilities in Bulgaria with over 10 thermal mineral pools. Nothing like bathing in a hot bath outside, while it’s snowing. There are also many other attractions in the various hotels, such a game rooms with oldschool air hockey and pinball machines.

Bansko – Bansko has a bigger variety of non-ski activities you can take part in. In the nearby village of Banya you can go horseback riding or try one of the thermal mineral springs there. In the town itself you can find a bowling alley, escape room, ice skating rink and much more.